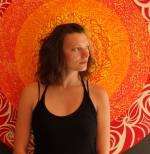 With knowledge of the past comes understanding of the present.

In order to discover the essence of creation and to consciously create and commune with art, it is necessary to go back to its roots. However, before we find the ancient origins of art, we have to determine what has shaped the culture that we are creating and where is our place in it.

What once mostly dominated the European cultural heritage was Christianity with its biblical command to subdue the Earth. In the process of Christianization sacred groves were cut out, places of worship devastated and animism eradicated. Man became the pantocrator ruling over the world of Nature. Later on materialist thinking put a hold on scientific research and philosophical studies of the sphere of the spirit, which was given over to the realm of religion.

The world we live in has been desacralized. The present-day economic and ecological crises, as well as spiritual deprivation are all the result of this authoritarian attitude towards Nature: lack of respect for it and no meaningful relationship with its living creatures.

To restore harmony we need to go back to the roots and study the origins of our civilization, our culture and our beliefs. As we uncover those ancient sources, we may find that in its most profound dimensions art originates from mystical and magical experiences and practices. To create art used to mean to explore the soul and to penetrate the mysteries of nature, to familiarize the world and to form an individual and spiritual human being. Man needed to understand and impact reality; and so man created art.

Today’s archaeological discoveries seem to confirm the above. Among others, the research work of a Polish scientist, prehistoric archaeologist, Dr Jerzy Tomasz Bąbel, demonstrates the sacredness of Art, which, from the very beginning, served as the gate to one’s deep inner self. Prehistoric cave painting gives evidence to the primeval ties between magic and art. The magical, or mystical, understanding of the world gave rise to this human need for representing the essence of the world around in an artistic form. Drawings, diagrams, symbols etc. took on the role of the universal and timeless archetypes.

However, magic was not only the mother of art; it also gave birth to religion, philosophy, and science, particularly medicine and chemistry. Unfortunately, this development led to the rationalization of magic, to its being reduced to scientific or religious paradigms and concepts. What could not be transformed was degraded and forbidden. As a kind of pre-scientific stage, though, arcane arts were still quite common. In the Renaissance era, the University of Kraków offered courses in astrology; some academics as well as courtiers, later followed by the gentry and bourgeoisie, cultivated the practices of alchemy, magic and mantic arts: crystallomancy, catoptromancy and chiromancy. More primitive magic, witchcraft and sorcery were the domain of the lower classes. Then came the Inquisition, with witch hunting and social psychosis, which eliminated magic from everyday life and turned it into something cursed and forbidden. Where it survived, in quite closed circles, magic tended to arouse aversion and fear.

According to Apuleius (Roman magician, thinker, philosopher and writer, c.2nd century AD), magic involves communication with deities and an ability to attain any goal due to the mysterious power of magic charms. Aleister Crowley, one of the eminent reformers of modern-day magic, claims that magic is a science and an art of causing change in accordance with one’s own will.

Another way of seeing magic is to treat it as an act of will, imposed on one’s world by the use of various mental and physical techniques. Depth psychology views primordial thinking as directed inwardly. Individual personality (the ego) was only being formed, man-made products were coming from Nature, to which man felt related. The world was seen as spiritual, and through his skills, rituals and celebrations, man could influence its magic forces, control them and use them for his own purposes (magia naturalis). Magical thinking (a part has all the properties of the whole) was a result of that deep bond with the world, of the belief that all things are endowed with life (Spiritus Mundi, or Anima Mundi). Magic was the source of thought and action. Today, children still exhibit that primordiality of the thinking process, but as they grow older, pragmatism and rationalization sever their magical, emotional and spiritual ties with the world.

Modern-day societies are infected with the consumer lifestyle, standardization and homogenization, which deepen the chasm between man and Nature, the Universe and the Absolute. The above may have been instrumental in the rise of the New Age movement, which tries to fill the void left by the capitalist way of life and dogmatic religious ideologies. Today we observe a growing interest in mysticism and ancient cultures and beliefs (such as neo-paganism, shamanism); as well as a fascination with oriental mental techniques, such as meditation, yoga and tantra; new scientific researches include depth and transpersonal psychology. Young people seem to substitute mystical experiences with psychedelic sensations: drugs, alcohol, musical trance and ecstasy. Esoteric wisdom is sought – divination techniques and astrology are studied and practised. In answer to the ever-growing need for spirituality, some commercial pseudo-magical services have also appeared on the market and, unfortunately, they abuse people’s trust for their own material benefit.

It must be duly noted that the urge to express one’s spirituality has always had its artistic rendering. However, events devoted solely to mystic issues are not often held in prestigious art galleries. As the curator of this exhibition, I hope that it will manage the task of demonstrating the artists’ quest for higher levels of cognition. To keep developing, any culture needs a voice that will challenge it. Artists are the ones who do not allow stagnation to creep in as they awaken the inner life, the authentic voice of the psyche. Back to the Roots is Poland’s first ever exhibition showing works by artists representing different nationalities and generations, who have directed their search for artistic identity towards the art of mysticism and transcendence, and who have attempted to discover its sources in esotericism, mythology and psychedelia.

The artists tackle the above issues using a variety of media: painting, drawing, photography, computer graphics, video and performance. The exhibition is accompanied by a panel discussion called Magic – the Ancient Mother of Art, which will provide an opportunity to express thoughts and opinions and elaborate on controversies, stereotypes as well as fears. The event has a strong potential for appealing to wide audiences, for broadening the minds, for showing a wider perspective on the subject: going beyond realism, exploring life beyond the body, proving that the universal cosmic area does exist and is cultivated in both the art and the lives of the artists. We should remember that mysticism aims at knowing the world, at understanding the mysteries of nature and being, at deepening the spiritual knowledge and enhancing personal power – all of that by the use of magic in the practical matters of everyday life.

The works of the artists which I have chosen for the exhibition are characterized by their rich language of symbols and archetypal images. A pattern used as a symbol or as a decorative element can be found in all cultures throughout history. It is a universal language, a kind of Esperanto, a code containing vital basic information. Symbols are of archetypal, sacred and magical value, whereas decorative designs tell family histories (Scottish tartan), declare one’s social status (Maori tattoos) or fulfil protective functions (hamsa, or the hand of Fatima; Slavic patterns).

For Carl Gustav Jung, symbols and archetypes were the key to understanding the psychological process which is called individuation. Symbols help to restore order in the world, which is sometimes seen as divided and chaotic. They constitute a persuasive and content-rich value which permeates every individual while demonstrating the most fundamental form aspiring to the universal. According to Jung, symbolic art arises from the collective unconscious, which is the sphere of the unconscious mythology, whose archetypes are the common good of humanity. He also claimed that “symbolic life” is needed to compensate for our everyday life filled with banality and having no place for ritual, prayer or meditation. Only symbols can express the need of the soul (psyche). For Jung, to seek the meaning of life was of utmost importance; a career or raising children were all “Maya”, an illusion pulling us away from the opportunity to experience the sacred. Life has meaning when it is life divine – extra ecclesian nulla salus, and the divinity is expressed as a symbol.

The works presented at this exhibition possess the power to unite us with the source of art, the power to be freed from the daily routine and lost in contemplation, to activate our spiritual consciousness and lead us to authentic mystical experiences.

Carl Gustav Jung, The Psychology of Kundalini Yoga. Notes of the Seminar Given in 1932, edited by Sonu Shamdasani.

Erich Fromm, The Fogotten Language, an Introduction to the Understanding of Dreams, Fairy Tales and Myths.