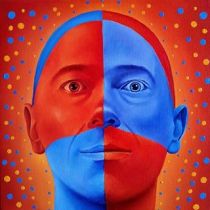 Now all my senses savour you with delight...

Both in my art and my life, I strive to explore the multi-dimensional aspects and boundaries of the so-called reality. I am a mystic who pursues full integration of spirit and matter, that which is above and that which is below. My cause is the unification of any and all opposites. In one of the Gnostic Gospels Jesus speaks of it as follows: When you make the two one, and you make the inside as the outside and the outside as the inside and the above as the below, and if you establish the male with the female as a single unity - then shall you enter the Kingdom of Heaven.

I find my inspiration in travels, tales and surrealism, in the mysteries of the Flower of Life and the Sacred Geometry, and finally in the altered states of consciousness and unlimited imagination, which constitutes the key to superior vision.

In his "Tarot and the Journey of the Hero", Hajo Banzhaf describes the odyssey of the eponymous hero as the oldest tale in the world, woven from myths, stories and legends. It sets the background for all other tales told until this day, whatever name they may bear, in any language and in any culture. The tale did not have to be made up, as it expresses the inner knowledge of the human soul and constitutes the archetypal path of human life. This is what makes it so fascinating, and for this reason it should be retold over and over again, so that we never forget why we are here on Earth and what it is that we should accomplish here. The entire journey is an archetype of a life scenario, woven from separate preimages.

For as long as I can remember, I have perceived life as an eternal wander, a pilgrimage. Of course I realize that the majority of people, if not all, view it in a similar way. For some, however, this connotation appears to be much more intense. Such is the case with me. My Yavallonian name, Valcari, means Wanderer and Hyper-Dimensional Traveller. Even though my legendary Great Journey is still ahead of me, I have already started successfully exploring the remotest corners of the universe, multi-dimensional hyperspaces and secret recesses of my being. Not only in meditation - an altered state of consciousness - but above all in everyday life I attempt to explore the boundaries of reality and discover the joy which can be derived from living in the here and now.

In this way, the Wanderer archetype manifests itself in my life. The most interesting part of the trip takes place right now, as it is not the destination, but the very experience of the road that is the proverbial cherry on top. As a certain friend of mine put it, I take my hat off to the tireless wanderer who traverses worlds in search for vision and balance. On his interdimensional travel he will experience beauty, but also danger, until he understands that there is no black or white, and that the delight of being is available to everyone who dares to reach out for it.

In visual arts - my preferred form of expression - I attempt to portray the unfathomable depths of the human spirit. Some of my paintings and graphics include the motif of eyes, which are the window to the soul. Their pupils are widened under the influence of endogenous hallucinogens. All this exists not only in my mind and perception, but also far beyond them. Luminous landscapes, artefacts, magical portals and psychedelic gates hypnotize the viewers and put them in a contemplative mood. My path is a natural return to the Source, to the bosom of the Universal Mind, the origin of all visions.

Alex Grey believes that the purpose of modern shamanic art is to awaken and open our cultural awareness to unknown realities, sacred mysteries which have been suppressed and rejected by scientific, ecclesiastical, cultural and administrative institutions. The mission of a visionary artist is to experience higher spiritual states and to transfer them - in the form of energy or images - to their art. The artist's main medium is consciousness, this invigorating power which permeates and gives direction to all other means of expression.

Another such medium is an active imagination. In his best-seller "Breaking Open The Head", Daniel Pinchbeck goes even further to say that creativity is the only purpose of being, and our objective is to strive to exist beyond the physical plane and to create universes of our own.

By analogy, the act of creation can be compared to a shamanic journey. The artist, much like the shaman, goes into a deep trance to experience death and rebirth, then returns from the other world and heals themselves and the whole tribe.

Another vital element of my creation, which on one hand bonds all the other elements together, and on the other derives directly from them, is Yavallon, a language of visual communication, expression and perception. Yavallon is a manifestation of ideas which, through certain actions, shatter rigid structures and patterns rooted deep in our thoughts, beliefs, language, society and culture. As a result, the level of individual and collective awareness increases; a space for freedom of creativity appears, where art is the natural nest for magical thinking, and entheogens make it possible to enjoy and experience the divine planes of existence and creation.

The entheogens, substances which induce mystical and spiritual experiences and radically alter consciousness and perception, are among my most fascinating experiments.

Entheogenic chemical compounds occur naturally in many different species of plants, fungi or even animals (such as the toad Bufo alvarius) and are produced by our organisms. The most powerful substance in this group is dimethyltryptamine, also known as DMT, a psychoactive agent found in the famous Amazon brew - ayahuasca. We are all well familiar with the DMT sphere, as we encounter it in our dreams and mystical visions. It accompanies us in the moment of birth, and allows us to view our life like a kaleidoscope at the time of death.

Similar deep insights and transformations can be achieved thanks to psilocybin mushrooms. The most renowned example of those is the Mexican Psilocybe cubensis, made famous in the 70s by the McKenna brothers. I, personally, favour our native Psilocybe semilanceata over any other species, as it grows in the land where I was born. Even though I feel connected to the whole Mother Earth, there is no other part of it I hold as dear as the one I live in.

I probably need not even mention the obvious examples, such as cannabis, peyote cactus, salvia divinorum, LSD or the African ibogaine, which holds the power to cure heroin and alcohol addictions.

The psychedelics (unveiling the mind), hallucinogens (inducing visions) and entheogens (connecting to the inner divinity), used carefully and in a ceremonial context, are a powerful anti-system tool. This is why the system hates them, demonizes them and prohibits them. Meanwhile, those allegedly dangerous and "illegal" plants and substances may well serve as natural medicine, helpful in various kinds of therapy or addiction treatment, and stimulating those searching for a creative lifestyle. They allow us to gradually discard all ego filters and perceive energy. I truly think that there is a point in the words of Terence McKenna, who claimed that there is a close causal link to be found between the suppression of natural human fascination with altered states of consciousness, and the current disastrous condition of all life on Earth.

The DMT, described as The Spirit Molecule or the Divine Moments of Truth, smoked or consumed in the form of ayahuasca, contributes to total redefinition of our views on the nature of reality and forces us to revise everything we know and believe.

I concur with the author of "Breaking Open The Head" in the opinion that a DMT-induced explosion is not a trip which should be taken often, as it comes with an instinctive sense of threat, among other things. However, everyone should certainly experience it at least once or twice in life. The portal exists. To give up the exploration of mysteries which lie on the other side of the mirror would mean to deny the entire legacy of human curiosity.

There is clearly a reason for which Nature equipped the human brain in a DMT receptor, and for which our pineal gland, a tiny, mysterious organ in its centre, produces this very substance.

According to Buddhist tradition, the soul is incarnated in the forty-ninth day after conception. This is when the baby's gender can be determined, and when the young brain has already formed the pineal gland, which was named the Seat of the Soul by Descartes. If this is the case, then who knows - perhaps that is when we have our very first dimethyltryptamine trip.

During one of my ayahuasca ceremonies I experienced what is referred to as a near-death experience. It was, in a way, a shadow of things to come, a simulation on a mental and spiritual level. That was when I gained the ability to reasonably distance myself from many matters in my life and understood, among other things, that the actual moment of death will be our ultimate psychedelic experience. Dimethyltryptamine is a sort of cosmic rocket fuel which has the power to launch the soul out of the body with the speed of light, and carry it into the transcendental space beyond time and thought. In order to complete another cycle, the soul then sets off on a great journey to the Source, which is the origin of all things and to which all things must return...

Of course these experiences do not provide a simple recipe for life and do not carry solutions to all problems; quite the contrary, they generate more questions, but simultaneously show the way to find the answers in ourselves. If not in ourselves, then where should we go to seek? To religions, gods, saviours, gurus, priests, fortune-tellers, therapists? These are all possible options, naturally, but it is enough to take a glance at the history of humanity to find out where they have led us. All signs in heaven and on Earth show that this is the time of awakening, breaking through the matrix, finding the true master in oneself. We are the visionaries and the designers of the future. We are the New Earth and the New Heavens.

As a summary, I will once again refer to Daniel Pinchbeck: Where will we find shamans powerful enough to suck the spiritual poison from our social body and vomit it out for us? Wizards who can tame these demons? Visionaries who can point the way forward? Unlikely as it seems, we have to become our own shamans, wizards, and seers. As spiritual warriors, we must take responsibility for the plight of our species. To break the spell of our culture’s death-trap deceptions and hypnotic distractions, we need the courage to confront what lies behind the open doors of our own minds...